Background: Disseminated Kaposi sarcoma (DKS) is present in patients with advanced HIV infection in whom co-infection with other opportunistic pathogens can occur. Bone marrow (BM) aspirate and biopsy comprise a robust diagnostic tool in patients with fever, cytopenias, and abnormal liver tests. However, the yield in patients with DKS has not been determined.

Objective: The aim of this study was to evaluate the utility of BM aspirate and biopsy in patients with DKS. Methods: We included 40 male patients with a recent diagnosis of DKS. BM aspirate and biopsy was performed as part of the workup to rule out co-infections. Results: In four patients, Mycobacterium avium complex (MAC) was recovered from culture. In other four patients, intracellular yeasts were observed in the Grocott stain, diagnosed as Histoplasma. The yield of BM was calculated in 20%. Only 12 patients (30%) had fever and 11 (27.5%) had pancytopenia. Alkaline phosphatase (ALP) above normal values and C-reactive protein (CRP) were higher in patients with positive results for BM than in those with negative results (63% vs. 21.9%, and 3.0 vs. 1.2 mg/L; p = 0.03 in both comparisons). No differences were found when complete blood-count abnormalities were compared. Conclusion: We recommend performing a BM aspirate for stains, culture, and biopsy in all HIV patients with DKS, as this will permit the early diagnosis of co-infections and prevent further complications in those who receive chemotherapy. 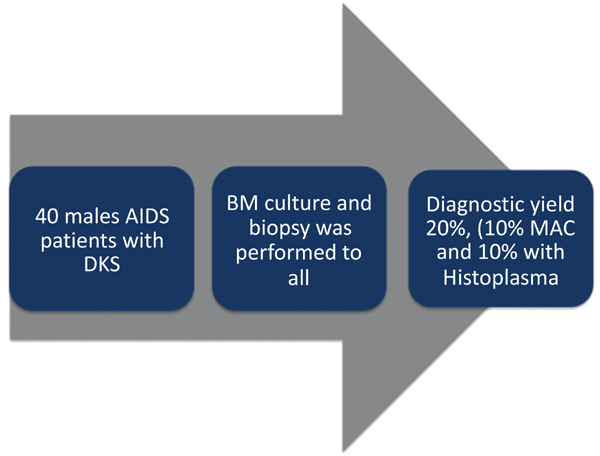