Background: Emergence of Kaposi's Sarcoma in the cases other than HIV, following the use of immunosuppressant drugs, demonstrates that it is related to weak immunity. The fact that this malignancy does not occur in every HIV-positive patient suggests that genetic predisposition may also be effective. Replacement of one of the base pairs of adenine, guanine, cytosine, and thymine that constitute the DNA sequence in the human genome with another base pair can affect susceptibility to disease, response to treatment, and immunity.

Objective: The purpose of this study is to analyze the Single Nucleotide Polymorphism that could predispose to Kaposi's sarcoma of an HIV-infected patient and to identify which nucleotides such SNPs correspond to, using the microarray technology.

Materials and Methods: The blood samples of individuals, one of whom was diagnosed with Kaposi's Sarcoma HIV (+) visiting the outpatient clinic of infectious diseases polyclinic of Harran University Research and Practice Hospital and of a healthy individual with no Kaposi's Sarcoma, were used in the study. Following the DNA isolation of the blood samples taken from the respective individuals, a SNP analysis was conducted on the microarray device. 204,000 SNPs obtained were scanned later on in the databases in an attempt to identify the SNPs related to Kaposi's Sarcoma.

Results: In the 204,000 SNP screenings, we scrutinized the SNPs that differ in the case of Kaposi's Sarcoma [KS (+) and HIV (+)] on the basis of Control [KS(-) and HIV(-)] and HIV+ [KS(-)], and two SNPs of the ENDRA gene, three SNPs of the ADRA1A gene, six SNPs of the STIM1 gene, four SNPs of the EFNB2 gene, and one SNP of the CD209 gene were found to be different. However, when it comes to all SNPs (all the 204.000 SNPs) screened in terms of allele, it was observed that the AA and BB alleles were lower in the patient with Kaposi's Sarcoma [KS (+) and HIV (+)] compared to other groups and AB alleles were found to be higher than others in the patient with Kaposi's sarcoma [KS] (+) and HIV (+)].

Conclusion: In the microarray study we have conducted, 204,000 SNPs were screened for Control (HIV-) HIV (+) and HIV (+) patient with Kaposi's Sarcoma. It was found that 32,362 of those SNPs had different alleles in the Kaposi's Sarcoma [KS + HIV (+)] patient, while they had the same ones in the control [KS (-) and HIV (-)] and HIV + [KS (-)] group. 16 of the 32,362 SNPs took place among the genes related to Kaposi's Sarcoma. In the cases of Kaposi's Sarcoma with suspected diagnosis, it can be used as a beneficial laboratory test. 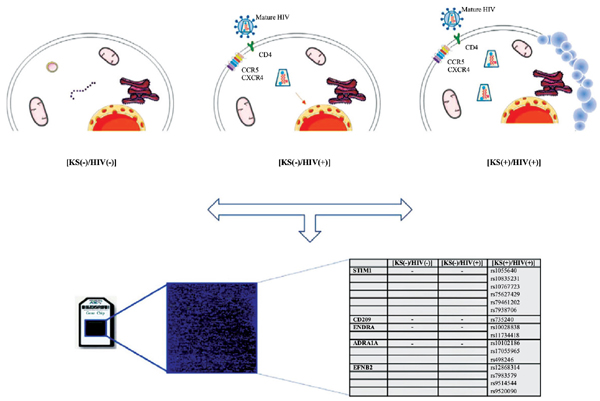