HIV infection causes CD4 depletion and immune deficiency. The virus infects CD4 T cells through binding to CD4 and one of the chemokine coreceptors, CXCR4 (X4) or CCR5 (R5). It has also been known that HIV tropism switch, from R5 to X4, is associated with rapid CD4 depletion, suggesting a key role of viral factors in driving CD4 depletion. However, the virological driver for HIV-mediated CD4 depletion has not been fully elucidated. We hypothesized that HIV-mediated chemokine coreceptor signaling, particularly chronic signaling through CXCR4, plays a major role in CD4 dysfunction and depletion; we also hypothesized that there is an R5X4 signaling (R5X4sig) viral subspecies, evolving from the natural replication course of R5-utilizing viruses, that is responsible for CD4 T cell depletion in R5 virus infection. To gain traction for our hypothesis, in this review, we discuss a recent finding from Cui and co-authors who described the rapid tropism switch and high pathogenicity of an HIV-1 R5 virus, CRF01_AE. We speculate that CRF01_AE may be the hypothetical R5X4sig viral species that is rapidly evolving towards the X4 phenotype. We also attempt to discuss the intricate relationships between HIV-mediated chemokine coreceptor signaling, viral tropism switch and HIV-mediated CD4 depletion, in hopes of providing a deeper understanding of HIV pathogenesis in blood CD4 T cells. 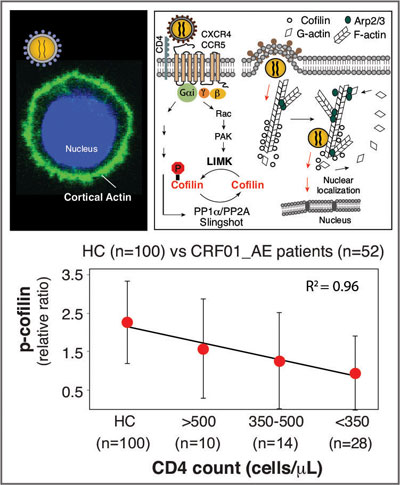