Background: Indonesia lags behind its peers with regard to ART coverage of PLHIV. Insufficient HIV testing among MSM and other key affected populations remains a barrier to increasing ART coverage.

Objective: This report presents the results of the first government-endorsed implementation research study of a community screening approach to increasing the rate of HIV testing among MSM in three cities.

Methods: All new MSM outreach contacts meeting eligibility criteria during March-June 2017 were included in the study. HIV testing at a government health facility, which is required to qualify for government-supported ART, was advised for all new contacts. Men refusing formal testing were offered an HIV screening test in a community setting using a saliva-based rapid test and advised to get a confirmatory test at a health facility. All outreach contacts and testing activities were recorded on individual client records.

Conclusion: While community screening resulted in more MSM knowing their HIV status, reluctance to avail government health facility-based services, or indeed to be tested at all, must be addressed if community screening is to accelerate progress in getting HIV-positive MSM onto treatment. 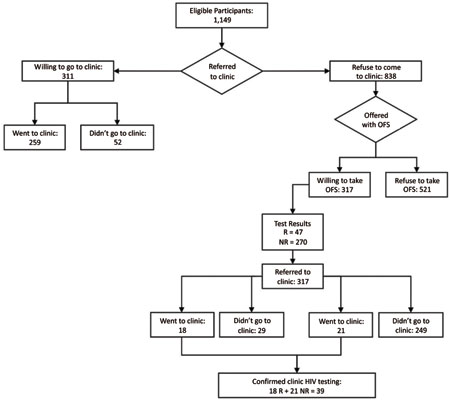