Background: HIV infection induces alterations in the gut-associated lymphoid tissue (GALT) that constitutes the most important site for viral replication due to the extensive presence of effector memory T-cells. In the case of HIV-controllers, several studies have reported fewer peripheral alterations and conserved immune responses that correlate with viral control; however, the histopathological characterization of GALT in those patients is still missing. In this study, we evaluated pathological alterations in GALT, trying to associate them with clinical parameters of HIV infected patients with or without evidence of viral control.

Biopsy fragments were obtained by rectosigmoidoscopy and stained with hematoxylin and eosin, silver methenamine, Ziehl Neelsen, and modified Ziehl Neelsen.

Results: Histopathological findings in HIV-controllers were similar to those observed in the uninfected group. In contrast, noncontrollers exhibited several alterations including condyloma acuminate, squamous metaplasia and acute colitis. These alterations were associated with disease progression. 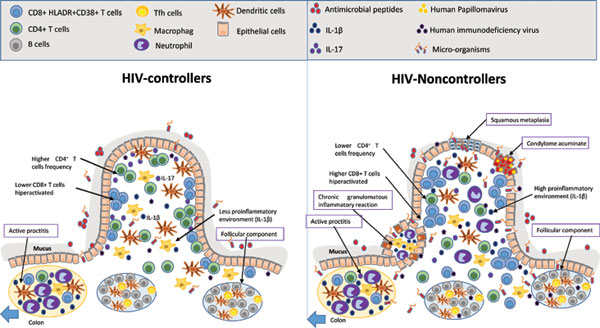