Objectives: Genotypic Tropism Testing (GTT) tools are generally developed based on HIV-1 subtype B (HIV-1B) and used for HIV-1C as well but with a large discordance of prediction between different methods. We used an established phenotypic assay for comparison with GTT methods and for the determination of in vitro maraviroc sensitivity of pure R5-tropic and dual-tropic HIV-1C.

Methods: Plasma was obtained from 58 HIV-1C infected Ethiopians. Envgp120 was cloned into a luciferase tagged NL4-3 plasmid. Phenotypic tropism was determined by in house method and the V3 sequences were analysed by five GTT methods. In vitro maraviroc sensitivity of R5-tropic and dual-tropic isolates were compared in the TZMbl cell-line.

Conclusion: There is a high discordance between GTT methods, which underestimates the presence of R5 and overestimates X4 strains compared to a phenotypic assay. Currently available GTT algorithms should be further improved for tropism prediction in HIV-1C. Maraviroc has an in vitro activity against most HIV-1C viruses and could be considered as an alternative regimen in individuals infected with CCR5-tropic HIV-1C viruses. 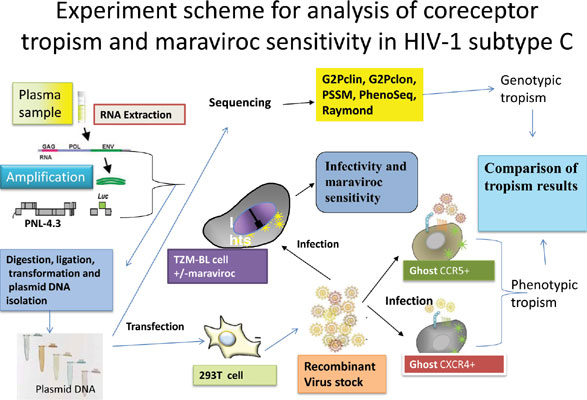