Background: Many details of HIV-1 molecular virology have been translated into lifesaving antiviral drugs. Yet, we have an incomplete understanding of the cells in which HIV-1 replicates in untreated individuals and persists in during antiretroviral therapy.

Methods: In this review we discuss how viral entry phenotypes have been characterized and the insights they have revealed about the target cells supporting HIV-1 replication. In addition, we will examine whether some HIV-1 variants have the ability to enter cells lacking CD4 (such as astrocytes) and the role that trans-infection plays in HIV-1 replication.

Results: HIV-1 entry into a target cell is determined by whether the viral receptor (CD4) and the coreceptor (CCR5 or CXCR4) are expressed on that cell. Sustained HIV-1 replication in a cell type can produce viral lineages that are tuned to the CD4 density and coreceptor expressed on those cells; a fact that allows us to use Env protein entry phenotypes to infer information about the cells in which a viral lineage has been replicating and adapting. 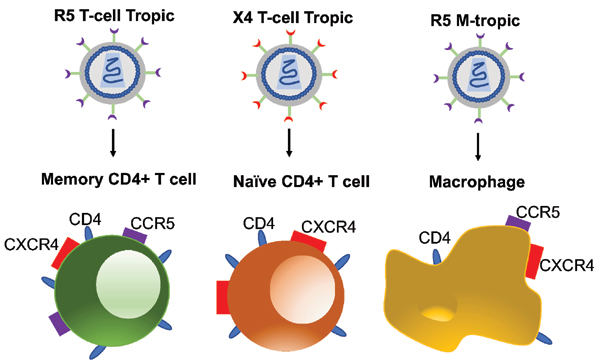