Background: One of the major complications of Human Immunodeficiency Virus (HIV) infection is the development of HIV-Associated Neurocognitive Disorders (HANDs) in approximately 50-60% of HIV infected individuals. Despite undetectable viral loads in the periphery owing to anti-retroviral therapy, neuroinflammation and neurocognitive impairment are still prevalent in HIV infected individuals. Several studies indicate that the central nervous system (CNS) abnormalities observed in HIV infected individuals are not a direct effect of viral replication in the CNS, rather these neurological abnormalities are associated with amplification of HIV specific signals by unknown mechanisms. We propose that some of these mechanisms of damage amplification are mediated by gap junction channels, pannexin and connexin hemichannels, tunneling nanotubes and microvesicles/exosomes.

Conclusion: In the current manuscript, we have described the mechanisms by which HIV “hijacks” these host cellular communication systems, leading to exacerbation of HIV neuropathogenesis, and to simultaneously promote the survival of HIV infected cells, resulting in the establishment of viral reservoirs. 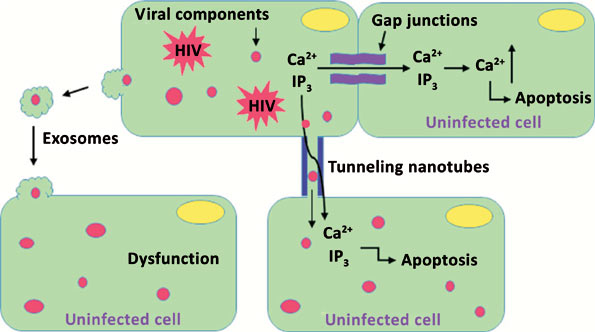