Background: To suppress HIV infection, host cells have evolved numerous defenses that generally belong to the innate and adaptive immune responses. Over the last decade, extensive efforts have been focused on understanding HIV restriction factors and mechanisms of evasion. The host protein APOBEC3G (A3G) was identified as a member of cytidine deaminase family in 2002, and it was shown that, in the absence of HIV encoded Vif, A3G can block the replication of HIV-1 by introducing viral hypermutations during reverse transcription, also conferring innate immunity to the virus. Hence, therapeutic exploitation of A3G as an antiviral therapy has received an increasing amount of attention. Recent studies have developed a series of strategies to abolish the interaction between Vif and A3G or facilitate A3G expression, thus enhancing active A3G formation and delivering A3G into virion. Conclusion: Here we present a review that discuss the role of A3G as a host innate immunity factor and its application in HIV therapy. 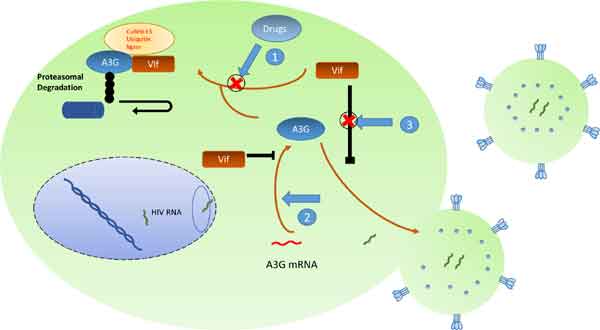